If you’re struggling with food and your body image, chances are you feel stuck in a vicious cycle. When you try to break free, it just seems to tighten its grip on you. It’s exhausting and sometimes it can be hard to think about anything else.

Our experienced Melbourne eating disorder psychologists can support you to break the cycle so you can start to feel more comfortable in your own skin. Through therapy, they’ll help you to understand what fuels your eating and body image concerns and empower you with science-backed tools and skills.

Let us help you stop the war with your body and food, so that you can get back to living your life.

What are the types of eating disorders?

Like all mental health issues, eating disorders involve a number of different symptoms. This means that each person’s lived experience of an eating disorder is unique.

Before we talk about the types of eating disorder diagnoses below, it’s helpful to keep in mind that not everybody’s eating issues fall into a neat diagnostic box. You might find yourself experiencing only a few of the symptoms of a particular type of eating disorder or you might notice that your symptoms change across time or that you can relate to all of the diagnoses.

Wherever you find yourself, that’s okay – there’s a lot we can do to help you break the cycle of eating and body image concerns.

There are several types of eating disorder diagnoses including:

What is considered overeating?

In the context of an eating disorder, symptoms of overeating include:

Binge eating is a form of overeating in which an objectively large amount of food (an amount that other people would agree is large) is eaten in a short period of time (e.g. less than two hours), while experiencing a loss of control.

What is considered undereating?

In the context of an eating disorder undereating relates to:

What are compensatory behaviours?

In the context of an eating disorder compensatory behaviours are used to try to control weight. They are usually used in an attempt to “cancel out” a binge eating episode or to make up for breaking some kind of food rule.

You might be experiencing body image concerns as part of an eating disorder, or as a separate issue.

How common are eating disorders and body image concerns?

According to the Butterfly Foundation, around one million Australians currently have an eating disorder and around 30% of young people are extremely or very concerned about their body. The National Eating Disorders Collaboration has found that around 16% of Australians are impacted by eating disorders and disordered eating.

Eating and body image concerns can be exhausting. Sometimes it can be hard to think about anything else.

Our experienced psychologists can help you to stop the war with your body and food, so that you can get back to living your life.

Any cookies that may not be particularly necessary for the website to function and is used specifically to collect user personal data via analytics, ads, other embedded contents are termed as non-necessary cookies. It is mandatory to procure user consent prior to running these cookies on your website. 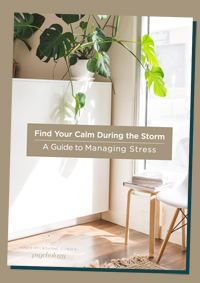 You'll receive our free e-book Finding Your Calm During the Storm: A Guide to Managing Stress
Your information will *never* be shared or sold to a 3rd party.
Go to Top