Understanding the Ins and Outs of Defence Mechanisms

Understanding the Ins and Outs of Defence Mechanisms

Defences get a bit of a bad wrap sometimes. In fact, being told that you’re being defensive is usually a pretty offensive experience (even if there is a grain of truth in what’s said). Our defences have their place though.

The main reason our defences exist is that if we were constantly bombarded by all of our thoughts, emotions, urges, memories and fears it would be nearly impossible to function. Our defences are an unconscious way to keep a big chunk of our experience out of our awareness so that we can get on with the business of living. In short, they help us to cope.

Everyone uses unconscious defences. The type of defences we use and the amount that we use them vary from person to person. It’s important to note that if you use a defence knowingly, by definition this process is not unconscious. All of the defences we speak about in this post happen automatically, without trying. They are unconscious ways of coping that only become a problem when they:

Here is a snapshot of some of the more common defence mechanisms we use.

This is one of the classic defences first described by the grandfather of psychology, Sigmund Freud. At its core, repression involves forgetting or ignoring experiences, thoughts or memories that are too upsetting for us to be in touch with. Traumatic memories can sometimes be stored in this way, or even just memories that are emotionally painful. Repressed memories become inaccessible to our conscious mind as a way to protect us from emotional hurt.

When we repress something we can repress part or all of the experience. For example, we might have general memories of being in a car accident, but no specific memories of what happened, even though we were physically there to witness this. Another simple example of repression is having a tough time during high school and later on being unable to recall the name of your high school.

If you’ve ever witnessed a child flopped on the floor in the supermarket demanding chocolate, you’ve experienced regression first hand. It’s ‘throwing your toys out of the pram’, so to speak.

We all regress sometimes, even as adults. ‘Hangry’ (feeling hungry and angry) is a modern day term for repression. Although keep in mind, to be considered a defence it needs to be unconscious. Consciously getting stroppy with those around you to let off some steam doesn’t qualify as a defence (who hasn’t been there by the way?!).

Aah, this one is a personal favourite of mine! And certainly a term that’s made its way into our everyday language. Projection happens when we misunderstand something we are experiencing internally (such as a thought, emotion or reaction) as happening outside of ourselves.

Do you ever have those days where you wake up feeling grumpy and irritable, only to find that everyone around you seems to have a short fuse? Chances are this could be a case of projection.

A couple of useful things to note about projection…

You might be wondering, ‘so how do I know what belongs to me and what belongs to the other person?’. Well, sometimes it’s pretty tricky to figure that out. More often than not, like most things in psychology, it’s a little from column A and a little from column B. Because we can’t read minds, we can never know for sure what another person is thinking. One thing we can do though is to try to develop an awareness of patterns in our own thinking, assumptions and reactions. For example, if you regularly worry that other people will let you down, it’s possible that some of the time at least, this assumption or belief says more about you than the person in front of you.

Withdrawal is the term used when we physically or emotionally ‘check-out’ because we feel overwhelmed by what’s happening around us. We might feel scared, angry, hurt, jealous or ashamed and to cope with this we leave, either literally or just by mentally withdrawing.

Like all of the defence mechanisms, there is a continuum of withdrawal. Depending on the degree and frequency of how much we withdraw, sometimes this can be an effective way of coping with an otherwise chaotic, overstimulating or upsetting environment. When overused though, this way of responding can develop into a form of avoidance which might cause more problems than it solves.

Denial is yet another term that’s crept into our everyday language. In a nutshell, denial is refusing to accept that something has happened or is happening.

Denial can be a hugely protective unconscious defence in a crisis or an emergency. Say for example, when our life or the life of someone else is at risk, by emotionally denying what’s happening we can mobilise ourselves to do whatever we need to do to make things safe again (for example, call an ambulance, perform CPR or run). By blocking out the fear and panic, we are able to ‘stay calm’ and do what needs to be done.

Other examples of denial are refusing to go to the doctor when you know something might be wrong, not acknowledging financial problems or ignoring ongoing difficulties in a relationship.

Intellectualising involves speaking about emotional experiences, memories or thoughts in a detached, emotionless way. For example, someone tells you about their experience of having their heart broken, but what they are saying and how they are saying it don’t quite match up.

Being able to stay rational and calm when we feel overwhelmed, hurt or fearful clearly has benefits (and is all too often applauded in our society), but if overused this defence can cause problems down the track because the emotions that were put aside may end up not being processed. Intellectualisation can also prevent us from reaching out and connecting to other people during vulnerable times, which might mean that we don’t get the care and support we need.

If you’ve ever really, really wanted something and then when you didn’t get it told yourselfsomething like, ‘it’s a blessing in disguise,’ ‘it wasn’t meant to be,’ or ‘I didn’t want it that much anyway,’ you might be familiar with rationalisation. This defence is a common one, and like all the defences, it can actually be a helpful way to cope when we don’t get something we want or when something negative happens to us. That said, if overused it can get in the way of us being honest with ourselves about the things that really matter.

This is just a fancy way of describing the process of turning the emotion we feel into its opposite because we feel unsettled, scared or ashamed about the original emotion. We avoid the emotion we feel by distracting ourselves with an emotion that is its polar opposite. An example is when you feel angry with someone but you go out of your way to be pleasant and ‘nice’. Or you feel attracted to someone, so you attack and criticise them. A clue that this defence is in operation is feeling that you’re going ‘overboard’ or overcompensating.

The image in this post was taken by Breeana Dunbar Photography

About the Author: Dr Jacqueline Baulch

Dr Jacqueline Baulch is a clinical psychologist and the director of Inner Melbourne Clinical Psychology. She is passionate about shifting the "hush-hush" atmosphere surrounding mental illness, emotions and vulnerability. Jacqueline believes that open and real conversations can spark hope and healing, and help us to feel less alone in this messy business of being a human. 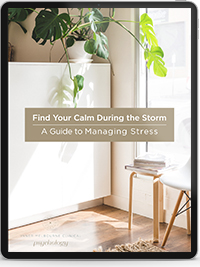